A 14.3 KM LONG ROAD UNDERNEATH THE SEA

When a tunnel is constructed underneath the sea, the concrete that is used must meet particularly high requirements. Steel fibre reinforced concrete has clear advantages here over conventional reinforced types. That’s why KrampeHarex® steel fibres were chosen to build the world’s longest and deepest underwater road tunnel – the Ryfylke Tunnel in Norway.
THE LONGEST UNDERWATER ROAD TUNNEL
IN THE WORLD
14.3 kilometres long and up to 290 m underneath the sea: the Ryfylke Tunnel is not only the longest underwater road tunnel in the world but also the deepest. It officially opened to traffic on 30 December 2019; together with two other tunnels, it forms part of the Ryfast tunnel system, which will eventually replace today’s ferry route between the Norwegian city of Stavanger and Strand municipality on the other side of the Horgefjord as well as the ferry from Oanes to Lauvvik across the Høgsfjord. The tunnel system is part of Norway's National Road 13 and consists of a total of three tunnels: the Eigane tunnel, 3.7 kilometres long, which runs under the city of Stavanger, the 5.5 kilometre long Hundvåg tunnel under Byford between Stavanger and Hundvåg, and the Ryfylke tunnel from Hundvåg island to Tau in Strand municipality.
Ryfylke Tunnel
A project of superlatives
14,3 km
Tunnel length
292 m u.M.
Lowest point
10.000 Cars/Day
Capacity
1 tube
per direction
“Behind the Breath” is an art project by Viel Bjerkeset Andersen –
and an important element of the traffic safety systems in the Ryfylke Tunnel.
To drive into a tunnel is all about driving into a non-familiar world, which many people find to be claustrophobic. To cope with the long tunnel drive, they need some metaphorical mental breaks. Viel Bjerkeset Andersen compares driving through a tunnel to how large marine mammals prepare dives. They, too, regularly have to pop up and down to breathe. For the Ryfylke Tunnel, the Norwegian artist sculpted two huge “whale-shaped breathing rooms”, lit by indirect LED light – an intangible presence of endless blue. Everyone driving through the tunnel sees a luminous bubble appearing; they then suddenly find themselves driving over a bridge into a room filled with an endlessness of crispy blue light, giving them a feeling of loosening up – of breathing. This art project is an important element of the traffic safety systems inside the tunnel. Viel Bjerkeset Andersen is an independent artist and part of the Norconsult project team for both the Ryfast and the Rogfast projects. She initiated this art project, known as “Behind the Breath”; the concept, design and visuals were developed in 2012 while on-site construction work started in spring 2017. The project was actually completed in 2019. “Behind the Breath” – An art concept by Viel Bjerkeset Andersen

One fibre for three tunnels 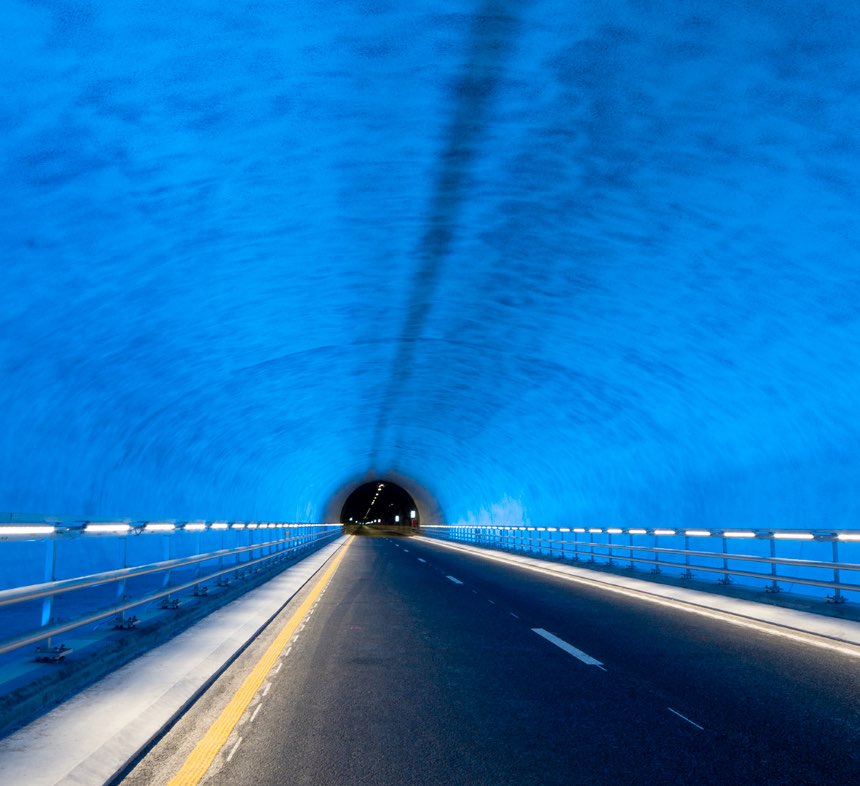 “Behind the Breath” – Art project, concept and design by Viel Bjerkeset Andersen in cooperation with Norconsult AS.

The tunnel was first drilled and blasted, and then reinforced with sprayed concrete. Steel fibres are particularly suitable for stabilising concrete after it has been sprayed. It was for this reason that KrampeHarex® steel fibres were used in all three tunnels of the Ryfast tunnel system; they were supplied to Marti and Norwegian AF, the appointed construction companies, by Mapei, our partner for Norway. The pictures here show the art project which was undertaken by Viel Bjerkeset Andersen in cooperation with Norconsult AS. Light objects can be seen in drop-shaped rooms. The indirect effect of the LED lighting is intended to prevent monotony, drowsiness and tunnel phobia. In some cases, the photographs were taken from the driver’s seat perspective.
Author // Wilhelm Nell